Fall is one of my favorite times of the year. The colors are amazing and the food is even better. One other treat are all the outdoor events that take place, Hayrides, Corn Maze, Pumpkin Picking and Carving, but one that has an added benefit is Apple picking. It gets you out side and when you get home you have a bounty to eat and create with. Apples are so plentiful this time of year, I decide to experiment with Apples this month. First we made Apple Cinnamon buns, what an amazing treat, hot apple pie in a delicious cinnamon roll. I used our Sticky Bun recipe, and added a homemade apple pie filling instead of the cinnamon butter filling that I borrowed from Gimme Delicious. I have updated the Sticky bun recipe to include my version of the filling.

When we went apple picking at Styers Farm, we stopped at the Styers market, two different owners (If you are interested in reading more about this visit my Apple Part 3-Canning blog). The store has an amazing bakery and are well know for their Apple cider doughnuts. So this week I decided to try my hand at making Homemade Apple Cider Doughnuts. A delicious baked doughnut, light and airy and full of flavor, and loaded with Cinnamon and Sugar. To my delight it is a very simple recipe and does not take all day to create a little heaven.

After sampling the doughnuts, I have decided to tweak the recipe slightly. The original recipe calls for lemon zest, and although it was delicious the lemon flavor overpowered the apple flavor, I have omitted it from my personal recipe. But I have made a not in the recipe about the zest. Second, I will continue to dip it in the sugar/cinnamon coating but instead of brushing the doughnuts with butter and dipping in a cinnamon and Sugar mixture. I think that I will be coating the doughnut in the future with a delicious Apple Cider Syrup, to give the donut a little more apple flavor. the recipe is also listed here.

You will thank me for this recipe I can not say enough about the flavors and textures of this doughnut. Try it you won’t be sorry. And like I always say

I adapted the doughnut recipe from the Barefoot Contessa by Ina Garten (posted in the Philadelphia Inquire, October 7, 2020), and the Apple Cider Syrup from Little Dairy on the Prairie. Thanks to both 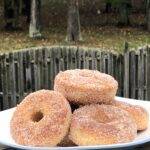 Rich cake batter, baked in a specialty donut pan, then coated with butter and dredged in Cinnamon and Sugar. Best served warm

For Cinnamon and Sugar topping

These donuts area delicious treat any time of the day.  The amount of 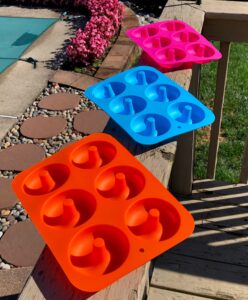 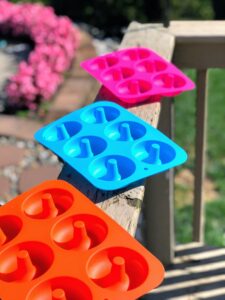 donuts you get from this recipe depends on the size of the donut pan or muffin pan you use.  My donut pans are the silicone style and they are 3″ in diameter and approximately 1″ deep.