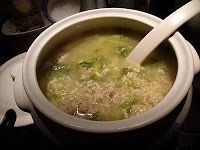 Yesterday while talking with my Sister, who just happens to live in Italy, the Food Capital of the World, ( Just my opinion). We began discussing different blogs that she has posted on her Website http://cookinginlucca.blogspot.it/?m=1 Cooking In Lucca, In our youth, a Sunday treat on occasion was Italian Wedding Soup. For anyone who doesn’t know about Italian Wedding Soup, it is a broth based soup with Rice, Greens and mini meatballs (these were my favorite part of the soup).  Donna decided to research the origins of Italian Wedding soup and discovered some very interesting facts. She has graciously allowed me to share her post,  I have copied the beginning of her post and the link to her blog so that you can read all about the origins of this soup.  I will have the recipe posted as well later today.  Enjoy 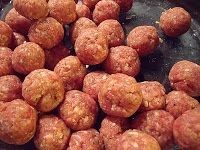 So why do they call it Italian Wedding Soup… I have yet to see it served at an Italian wedding!!

I did some research… and it looks like what the Italian-Americans call Italian Wedding Soup really started out in Naples as “menesta maretata” or “minestra maritata” or… married greens!! hence the distortion which became Wedding Soup!

Many of the Italians who emigrated to the United States were from the Campania region – and once in their new country they all became napuletan’… and of course they brought their cooking tradition with them!

Broad leafed greens are the an important ingredient in Neapolitan cooking: tender young Swiss chard, chicory, escarole, borage and so it should come as no surprise that they came up with this delicious soup in which the greens are happily “married” to boiled meat. The original recipe called for a rich broth made with beef, soup bone, a ham bone, piece of salami, a fresh sausage, a soup chicken and the usual bouquet of soup vegetables. When the broth was done, it was strained and chilled so that all of the fat could be removed. The greens – escarole, Swiss chard, chicory, torzella (a type of curly cabbage) – were prepared. They were put into a big pot of boiling water, when the water came to a boil the heat was turned off and they were left to sit in the hot water, covered for at least an hour. The greens were then served in shallow soup plates, steaming broth was poured over them and it was all topped with the cleaned, boiled meats and grated cheese.

This “menesta maritata” was praised as early as 1588 by The Marchese del Tufo.

My reference for the above summary is Luciano Pignataro